When my father was still alive, he had a penchant of planting fruit trees which he felt his family would enjoy the fruits as much as he did. He liked jackfruit and we also do. We love it. It is sweet, fleshy, and has a distinct aroma and smell. It is starchy and fibrous and a good source of  dietary fiber. At a distance,  we can’t notice that the fruits are ready for eating.  Not until we smell it. If it over ripes in the branch it falls off because it can no longer hold the weight of the fruit which has become soft at its base. Its average weight reaches 1 – 5 kilos per fruit depending on the size. 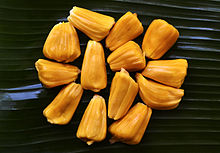 This is the ripened fruit which can be eaten as it is. It may also be an ingredient in local desserts, such as, halo-halo and banana turon,  or in sweet concoctions with shaved ice, as in, es campur, and es teler.

This is the ripe, sliced jackfruit.

Living with memories of my father and the jackfruit tree are sweet affairs from the past and thorny resemblances of our present life. No matter how ugly the fruit is, it is liked by many  because of its sweetness and excellent characteristics of the flesh.

Once in a while, a random check of your backyard will yield a number of excellent post  materials which abound at the expanse behind your house. Flowers, trees, vegetables in pots, domesticated animals, old and antiquated objects or anything that catches your attention. They are good prompts for your writing.

As my health ebbed a little bit, I don’t want myself to languish and rot at the comfort of my room without doing something that would merit the enhancement of my posting. So, after eating my breakfast, I got my camera and started my walk  for a close encounter of the backyard. Taking pictures at anything I fancied as a good material for write-ups, musings, scoops, etc. was very rewarding as it further boosted my photography techniques. Here are some photos of  the hot chili pepper, the plant that puts fire on your tongue and tears in your eyes.

This is how rice paddies are being prepared for planting. A small, limited plain like this,  sandwiched by a river down below and a hilly part of a resort makes it an attraction for city visitors of Ma-au, Negros Occidental, Philippines. Its irrigated field makes it perfect for a year-round production of rice and co-exist with the surrounding natural charm of the place.

Shrimp and other shellfish are among the most common food allergens.[3] The Jewish laws of Kashrut forbid the eating of shrimp.[4] According to the King James version of the Old Testament, it is acceptable to eat finfish, but shrimp are an abomination and should not be eaten.[5] In Islam, the Shafi’i, Maliki and Hanbali schools allow the eating of shrimp, while the Hanafi school does not allow it in Sunni Islam as well as the Shi’ite school (Ja’fari).

Shrimp are high in levels of omega-3s (generally beneficial) and low in levels of mercury (generally toxic).[6] As with other seafood, shrimp is high in calcium, iodine and protein but low in food energy. A shrimp-based meal is also a significant source of cholesterol, from 122 mg to 251 mg per 100 g of shrimp, depending on the method of preparation.[7] Shrimp consumption, however, is considered healthy for the circulatory system because the lack of significant levels of saturated fat in shrimp means that the high cholesterol content in shrimp actually improves the ratio of LDL to HDL cholesterol and lowers triglycerides.[8]

A ripe fruit of banana contains as much as 22 percent of carbohydrate, mainly as sugar, and is high in dietary fibre, potassium,manganese, and vitamins B6 and C. They are grown mostly in tropical countries.

Bananas are ideal for people looking to lose or maintain weight through sound nutrition, while also giving the body sustenance for daily strength and fitness.

I have made  500 posts already. So, I’ve made this far. I don’t know if those were quality posts or not. Are they?

During brownouts, I can only rely on the battery life of my laptop which lasts for only 3 hours, more or less. And at the height of those dark hours, I was at the mercy of the remaining breath of the cells storing the energy and converting it to electrical power to sustain my laptop usage. At the brink of its death, I was at my Yahoo Mail, inspecting, scrutinizing, and deleting a great number of aged ancient mails which dates back to the time of yesteryears. For the surviving weakened power, I was forcing to strike out three mails, pushing my way again and again until the arrow slipped from its intended direction and struck out an unknown item of an unknown key clicked. A portion of the monitor vanished without saying goodbye to its author. Trying hard for a harvest of good results, my recovery process proved fatal as the problem burst at the seams. Vacant lots widened where no one claimed ownership. More erratic key strikes were made. Titles left the screen and their bodies too. I thought it was time to seek HELP on line. I posted and came one. It was sunshinebaby86. I got hold of her warm hands minutes after HELP went flying on line. I tried to follow the instruction but did not get answers instantly. I opened a different window to spend some furious thoughts and feelings of my making mistakes on the keyboard.

Electricity have returned but only for awhile. Now, it’s gone again! Sleeping was the best panacea of a power outage during a stormy night.

I was awakened by the bright light left switched on during the brownout. With the thought of checking how was my Help been responded by Yahoo Request was put aside. I have still heavy eyes ready to close again as soon as I’ll sit at the chair nearby my bed and flip open the laptop. I’ll just wait for the sun rise.

Late. Very late. The latest. Waking up was hard to do. It’s already 9:30 AM and the latest to see the cloudy skies outside the window. Having an empty stomach, taking a bath was a clean “must do” after sleeping with the aircon off sweating it out in bed, lazy to stand up to turn it on.

Feeling refreshed, I checked on the unfinished business several hours passed. After some clicks, it rained mails. My laptop was drowned again with hermits, bearded hermits from nowhere. But still i was thankful those prodigal mails have returned in their rightful abode. Happy deleting session to me! I’ll begin the task soonest and Thank you, sunshinebaby86 for your helping warm hands. Extending them into my bedroom was a welcome treat.

Who says, only long-haired persons have their hair cut by barbers? Near-balds do, too!

My Visitors Around the World